Tait House Community Enterprise is delighted to be a host venue once again for this year’s Culture Night Limerick. This year the Tait House Culture Night offering will include a mix of Limerick’s singer/songwriter talent as well as a debut exhibition by a young art enthusiast.

As part of the event we will be welcoming the team 061 Recordings to Tait House for an evening of music that features some of Limerick’s up and coming singer/songwriters. This is a free event and all are welcome to attend.

Also featuring on the night will be 25-year-old Shannen Slattery, a young artist who is in the process of carving out a career for herself. After studying Animal Health and working for a time in a senior position at Limerick Greyhound Stadium, Shannen has taken the decisions to embark on a new life journey with art at its core. 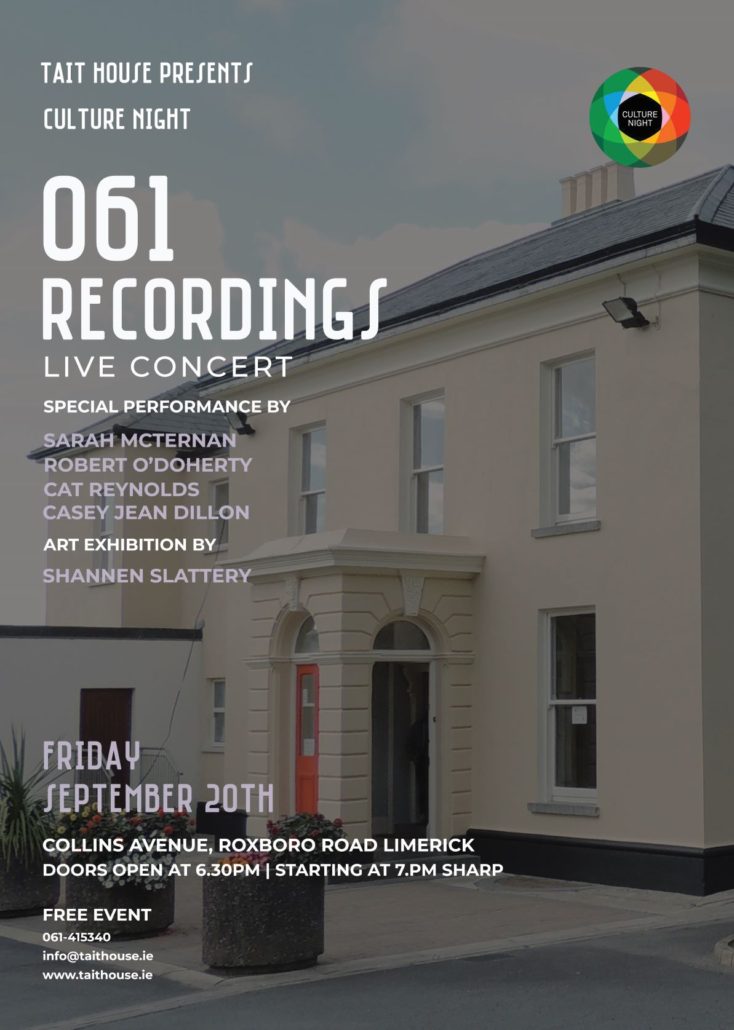 Limerick Culture Night 2019 will take place this year on Friday 20 September, with venues and public spaces across Limerick opening their doors to host a programme of free late-night entertainment, as part of an all-island celebration of arts, heritage and culture.

Announcing the Tait House Culture Night offering, CEO of Tait House Community Enterprise Tracey Lynch said: “Over the past year Tait House has welcomed a wide-range of people from across Limerick’s cultural sector. Most recently we linked up with the GAFF to develop a Youth Arts Summer Camp”.

“We are delighted to once again make our historic building available for the Culture Night celebrations in Limerick. 061 Recordings’ night of song will celebrate the huge talent that Limerick boasts and we are also delighted to give Shannen Slattery’s artwork a plaform to showcase her work. We look forward to welcoming audiences for what will be a fantastic night”.

Set up in 2018, 061 Recordings is a music project run by a group of young filmmakers who are also interested in music. The group produces music videos for Irish artists with the hopes of getting them the recognition they need. 061 Recordings say home-grown talent often gets lost in the large online talent pool and they want to give the artists the platform they deserve.

They will be hosting a free concert in celebration of Limerick’s Culture night in Tait House’s beautiful music room and have lined up a number of household names, along with some wine, finger food and most importantly, great music! 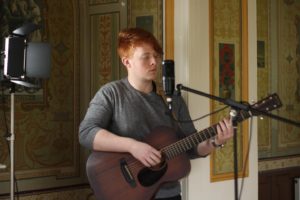 One of the acts who will perform on the night will be Cat Reynolds, a 21-year-old up and coming singer and songwriter from Limerick. He is currently in his final year at Cork School of Music and hopes to graduate with a BA in popular music studies. Cat has been writing since he was 16 but has only pursued his musical talents in the last year or so.

He has performed in venues all across Ireland and with the release of his EP later this year, he is hoping to one day do a national tour.

Also performing on the night is 19-year-old Limerick native Casey Jean Dillon, whose passion for music started at 8 years old when she got a Hannah Montana Guitar for Christmas. She has been playing the piano since she was 10 years old and has always loved competing and doing musicals, hoping to one day make it to Broadway.

Also taking to the stage is 25-year-old Limerick man Robert O’Doherty, a member of the Limerick band ‘Cashmere Tracksuit’ who perform around Limerick. He started playing music when he was 16 years old after his dad got him a guitar for Christmas and ever since has been practising every day. He finds music to be the greatest stress reliever and doesn’t know where he would be if he wasn’t able to carry a tune.

The final act to perform on the night is well-known artist Sarah McTernan. Sarah has been singing since she was a little girl and eventually applied to the Voice of Ireland following the advice of her friend. She didn’t tell anyone and ended up finishing 3rd in the final.

She later went on to compete in the Eurovision earlier this year after being invited to audition by RTE. She is now focusing on writing her own music and will be accompanied by Bonomeara on the night.

It is set to be a busy night with a wide range of varied events taking place across Limerick in celebration of Limerick’s culture. 061 Recordings said it was a “huge honour” to be considered as a part of Limerick’s Culture.

This is a free event but spaces are limited. To book you can contact info@taithouse.ie.